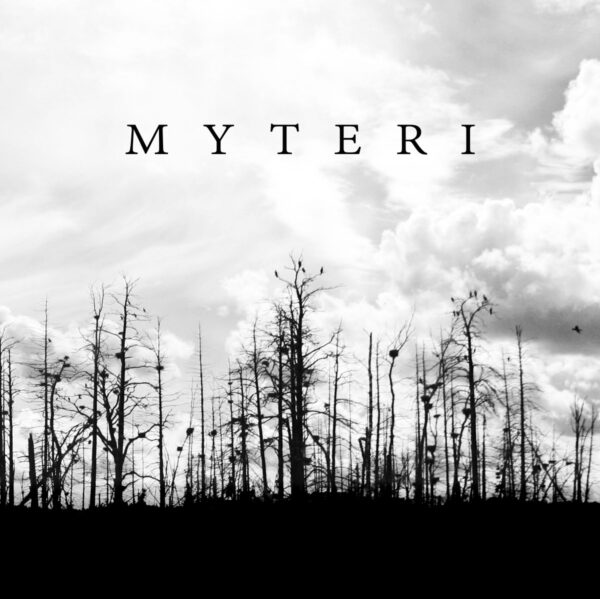 Formed in Sweden in the winter of 2013, Myteri is a five-piece band from Gothenburg, Falköping, and Kristinehamn that combines hardcore, crust, and d-beat to create a catalyst of uncompromising vocals, unyielding melodies, and unmerciful percussion in order to inspire change.  The band examines the conflict between being alive and being human while being completely conscious of the fact that mankind is the most destructive species on the planet.

“Gothenburg-based Myteri throw us a hardball of melodic crust that doesn’t let up from start to finish.  There’s an emphasis on melody, for sure.  Yeah, the vocals are guttural, but they’re overshadowed by layers of octave notes and major scales. Far from poppy, though.  Catchy and aggressive.”  Razorcake

“Myteri from Sweden hardcore stronghold of Gothenburg, bring us their debut LP bringing a total of ten tracks to their new plate.  With an intro that bears markings of something straight off the back of a Fall of Efrafa record, the speech over a slow dooming sound, however this is not strung out for ten minutes plus that is part a creeping build up before kicking in to something devastating.  Myteri do not piss around they set the scene and kick into gear, with thundering driving d-deat hardcore amidst a wall of power something to be expected with members of Eskatologia featuring in Myteri.  With robust riffs of a crushing anguish influences of From Ashes Rise and Link spring to mind.  The slipping back into atmospheric interludes through out helps bring darker layers to run through the LP.  This melodic laden Swedish dark hardcore that is a fairly solid offering from Myteri on their vinyl debut.”  D-Beat Beater

“Myteri combine crust and punk influences into 27 minutes of roiling hardcore, recalling a mix of Poison Idea, Fredag Den 13:e, and Martyrdöd.  With a very unassuming cover, along with the brief intro track, this seems to speak of post-metal more than anything else, although once you hit the first song proper, all this is dispelled and the fury of the band is unleashed. The songs are powered by d-beats and bile, raging and cursing for all they’re worth. This is a musical outlet for all of the feelings that the band have welling up inside and need to vent, which they do so with great enthusiasm.  Endless melodies seem to be added to the energetic rhythm guitars, and the band have a curious mix of darkness and light in their sound, almost as if all hope has been lost, except, just maybe, for one small glimmer which they are doing their best to save from being extinguished; this is what their sound evokes in me, at any rate.  Bands like this always seem full of energy, and the relentlessly upbeat songs harness this for every scrap of power.  Having said that though, my favourite songs here are the ones like Deforestation and Från Vaggan Till Graven, which mix up the style a bit; the d-beat hardcore is still the main feast, but there’s a little more variety in the delivery, with slower, introspective/atmospheric parts included alongside the rest of the aural carnage.  If you’re into this kind of d-beat influenced hardcore/crust/punk, check this out.”  Wonderbox Metal

“Myteri from Gothenburg, Sweden, play epic, soaring and heavy as fuck crust punk that will make you wanna raise your fist to the sky, get into your riot gear and start a full blown fucking riot.  Myteri’s music evokes apocalyptic landscapes, torn apart by war, plague, misery, and famine, but their songs are not completely devoid of all hope. There is a shining light in this band’s music that seems to be almost incendiary, like a torch for survival.  The last light of hope left in a world otherwise plunged into shadows.  The only light left to find the way out of the misery mankind has pulled upon itself.  Survivalism and freedom are huge conceptual elements in epic crust like this, and Myteri seem to really have wanted to emphasize this with their sapient use of epic d-beat gallops, war-torn vocals, and heavy, melodic riffing.  Myteri’s debut full-length album is a sprawling and unforgiving opera of darkened heavy punk that draws much influence from legendary crust bands like Amebix, Antisect, Anticimex and Totalitar, and from head-on collision-like d-beat bands like Wolfpack, Doom and Disfear.  But the real genetics of the band lie mostly in epic Spanish crust like Cop On Fire, Ictus, Ekkaia, and emo-crust in the vein of Remains of the Day etc., where the punk assault can be real, incumbent and heavy as fuck, but eerie melodies mostly coming from the guitars can also make the songs more luminous and atmospheric.  In any case, this is a prime example of amazing melodic heavy crust – if you like Tragedy, this shit will clamp on to your soul and not let you go ever again.”  CVLT Nation

“Formed at the start of the year in 2013, the crust punk/hardcore group Myteri are a quite interesting and impressive group.  The music is as you would expect for the style, pissed off and fast, but the band does manage to throw in plenty of good melody, catchy riffs and good overall sense of songwriting.  There is not anything that feels overblown or fast for the sake of it, and the emphasis on the songs is very appreciated.  From the short but chilling intro, the album starts off on a perhaps different than expected note.  However, by the time the second track picks up, the band is firing through great riffs and some very angry barking vocals.  The sense of energy provided in the music is undeniable and the vocals make the perfect accent to it, providing aggression but also a lot of impactful vocal lines and cadences.  There is something to be said about the mixing, where the vocals do come off a little too quiet at times and get drowned out by the music, but generally speaking this is not much of an issue, and the two compliment one another quite well.  Further, the short songs are of course a staple of the genre, but the band manages to pack so much in, and allows them all to have heir own identity which can be missed in some hardcore/crust acts.  There is plenty heavy riffing and screaming, but there is always some underlying melody in the guitars that does not go unnoticed and makes the songs stand out that much more.  The short overall run-time works for the album too, where as some bands may get a little over excited and release longer records for the sake of it, the band knows when enough is just right and nothing ever goes wasted.  Each track hits the marks when it needs to and does not overstay any welcome.  The album breezes by but has so much great memorability to the songs that you are left thinking about what you’ve heard long after its over and its hard to not come back for more.  With plenty of great melodies and passages throughout the 10 tracks, these guys are top notch players at creating aggression, but being able to make the music reflective when need be as well.  By the time everything is said and done, Myteri are a band to keep an eye on in the crust/hardcore scene.  Having only one real full-length album under their belts, the band is still new, but by no means young in their composition.  Armed with a great D.I.Y attitude and plenty to say, Myteri, the album, is one that features so much going on in such a compact time that its hard to get everything in one listen.  It takes multiple spins to reply get it all and by then its stuck in your head so much you can’t help but just keep going back for more.  The Swedish group hit this reviewer by surprise, but are one to keep eyes and ears on.  The scene will be very glad to have a band like Myteri in it if they are this good this early on.”  The Metal Observer