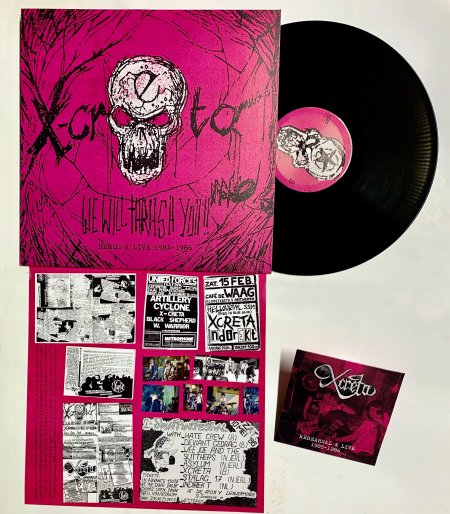 A killing collection of rare X-CRETA recordings (demos, rehearsals and live) prior to their smashing debut full length “Patronizing the Heterodox“. Formed in 1983, these Belgian Thrashcore gunners were responsible for some of the fiercest, stripped down, and energetic type of Crossover/Thrash, not far removed from the early releases by Voivod, but faster. At the top of their riff driven assault, some of the sickest vitriolic vocals around at the time, think of the sickest clash between Kreator‘s Mille Petrozza and Sid Migx of CCM. This F.O.A.D. anthology traces the early steps of the band starting from the primordial, pure Hardcore approach on their demo 1984 “13 recepten voor en hersenbloeding” and song from “Alle 55 kort” – both sounding quite close to their legendary country fellows Zyklome-A – and moving to the solid Speed/Thrashcore assault that followed with their demo 1985, “We will thrash you!!“. All the stuff included has been sourced from extremely rare tapes provided by our inner circle of friends-collectors and scrupulously remastered to keep the original rawness and intensity.  Bonus CD with live rehearsals, insert with photos, flyers and original tapes’ art. Watch the trailer HERE