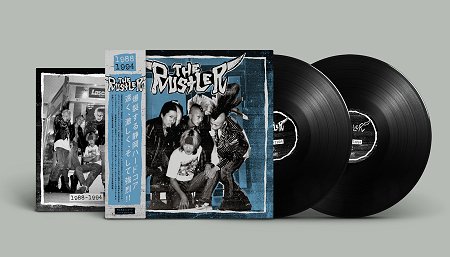 Another Japanese Hardcore gem on F.O.A.D. Records! Ultrafast, raging, powerful – three words to describe the overall feeling that we get approaching to any of the legendary names spawned by the Shizuoka HC scene. And with no doubt, The RUSTLER were one of the best representatives from there. Here you get their complete discography 1988-1994 consisting of their debut flexi disc, split 7″s with So What and Swindle Bitch, songs from “Shizuoka City Hardcore” and “Who’s chained up to the dogs of outrage!!” compilations and additional rare tracks never released on vinyl until now. 34 songs of uncompromised anger and speed, featuring Akiyama on drums (also in SWINDLE BITCH, ZAMZA, FORWARD and many more). This anthology shows the band’s progression from the early proto-blasting thrash assault of their s/t 10 song flexi disc, not far from the style of Deadless Muss (in their second phase) and early S.O.B., to a more traditional Japanese Hardcore approach. Double LP with gatefold jacket, OBI strip and 20 page booklet including a wide selection of rare photos, gig flyers and scans of the original releases. Watch the trailer HERE