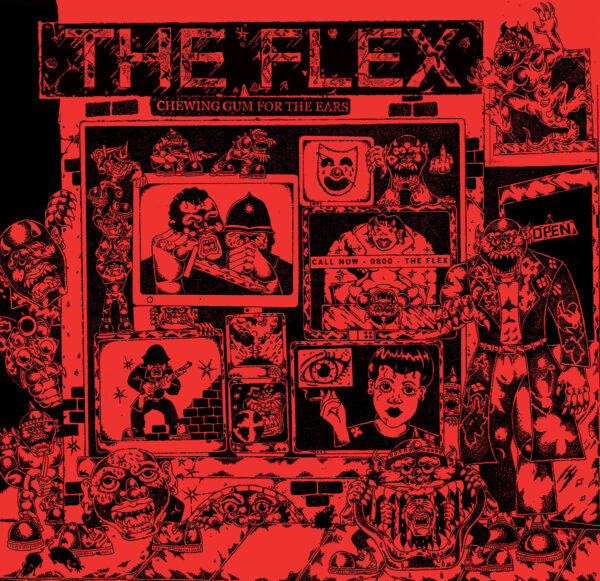 THE FLEX – Chewing Gum For The Ears LP

Ten years is a lifetime in Hardcore Punk. A band’s ability to traverse such a lengthy stay is a testament to their dedication to this thing of ours, which in and of itself is commendable. Remaining sonically relevant, and engaging ever younger audiences, is another beast altogether, and a far more difficult feat to achieve. Somehow, The Flex have managed both. Not only are they the defining band of the New Wave of British Hardcore movement of the 2010’s, not to mention the last band from this original wave still left (“Last Ones Left” indeed) but they continue to trudge on with unrelenting power, orchestrating live madness wherever they roll through.

Chewing Gum For The Ears is the most perfect illustration of the bands raw power to date. From the opening chords of “Warboy”, it is clear that The Flex formula remains unchanged: the vitriol of Boston 82, the lumber and swagger of mid to late 80’s NYHC, the monotone thud of UK82 and the blistering urgency of 90’s Japanese d-beat. A perfectly seamless blend of their influences, the highlights on this LP are too prevalent to list, with CGFTE earning the rare accolade of a no-skips-certified-banger. “Inferno” might hold the greatest up-tempo mosh part since Antidote’s “Foreign Job Lot”, sans the crummy political baggage. Beechwood Terrace starts off sounding like Oi!… more