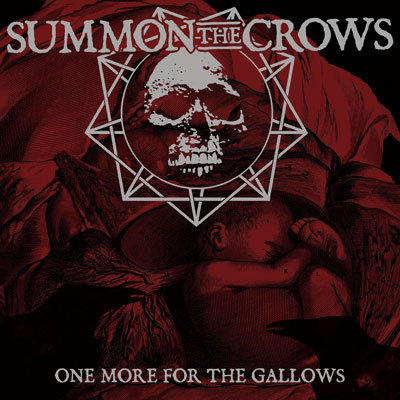 SUMMON THE CROWS – One More For The Gallows LP

Norways gloomiest and heaviest crust-monster is back! 4 years after their first full lenght “Scavengers Feast” , they unleash a brand new studio album of 10 manic and intense Bulldozer-Crust anthems that come along with a distinctive blackened vibe and a vary of fast and mid-tempo elements in their songwriting not unlike old Black Metal but with a way better production and a hell lot of sound and urge for power in their production! A guttural sick wibe within the vocals, a bass and drum unit that weights several tons and a heavy shredding and chugging guitar that creates a sonic juggernaut of grim and dire tunes reminding here and there of the impact and fusion of a vintage CELTIC FROST VOIVOID and even a crucial crust SLAYER! – SOMMON THE CROWS` deliver a misanthropic view upon the state of mind we’re in. Face down in the dirt of what we call “history” and “civilisation” in general. Recorded in 2010 at Oslo´s Endless Tinitus Studio, Mastered by Jack Control at Enormous Door Mastering and comes with a 30 x 60 poster insert including lyrics and artwork. The new wave of Norwegian Blackened Crust has arrived! CD Version available from SOUTHERN LORD.