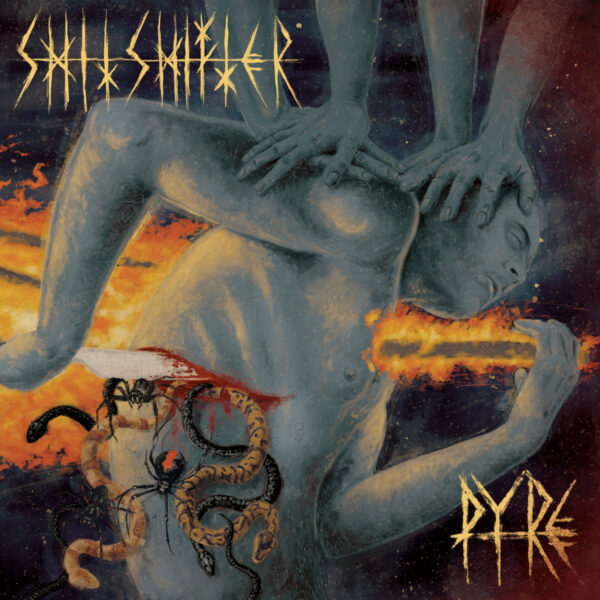 SHITSHIFTER, the German trio is no slouch when it comes to aggressive tunes. pyre” is kind of like a “best of” when it comes to their own sound. Every cut of every extreme genre they incorporate is done excellently. Their hardcore, grindcore, crust and death-metal elements are an explosive caustic cocktail. Clocking in at just 25min., “pyre”, the vinyl debut by SHITSHIFTER is nothing short of awesome. Every one of the album’s 9 tracks will pummel into you unrelentingly – think of a train with no brakes. From grimy hardcore riffage that seamlessly transitions into pure grind-metal madness – furious blast beats with a deadly array of bestial power-violence-esque riffs, the brutal, malevolent and bleak tone of “pyre” waste no time beating the listener to a shitty pulp. The longer/slower tracks on “pyre” delve deeper into the murky recesses of SHITSHIFTER’s sound. On these particular tracks the band craft sludgy, plodding, towering riffs that atomize with each note. In addition to their volatility, noisy and chaotic elements also plays an important role in these tracks. Those in need of a outstanding, aggressive fix are going to get that through and through. “pyre” makes curious what the future holds for SHITSHIFTER. These guys got the chemistry and made something that will snap some necks. The record is so simple to love and if you have ever been angry at all, you will love the rage they offer. If you’re a fan of NAILS, TRAP THEM or BEHEMOTH as well as TODAY IS THE DAY or UNSANE. Vinyl includes a digital download card. You need to check out SHITSHIFTER right away. Spin “pyre” – spin this monster!!!