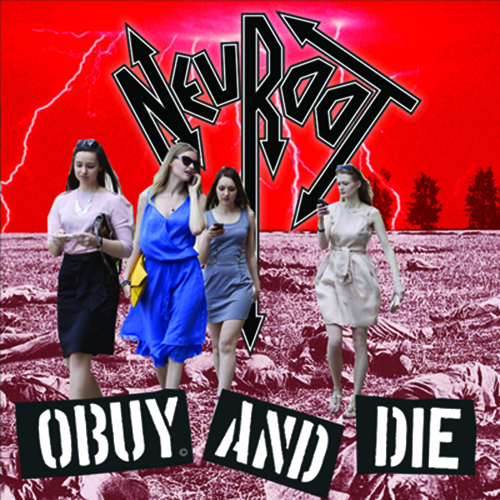 NEUROOT is a very well-known Hardcore, Punk band from the Netherlands that was active in the years 1981 – 1987. They got really famous because of their fast and relentless sound, pissed off Eighties Hardcore, Punk for the nerds and Noise freaks. Their first tape Macht Kaput Was Euch Kaput Macht” (1983), the “Right Is Might” EP (1986) and the “Plead Insanity” LP (1988) are called classic now and should not miss in a well sorted Punk collection. This was the past but now we live in the present and NEUROOT are back. In 2018 the band releases their new album “Obuy And Die”, seven songs where recorded in november 2017 at the Rocketdog Studios in Westervoort, The Netherlands to pressed on a Black piece of vinyl. Yes of course the wild youth of the band is gone but that doesn´t mean you have to expect modern Sell-Out Punk Rock. The new NEUROOT material might be a little bit slower, more melodic as many of you might expect, but believe me you will get a full dose of political Punk, Hardcore with some hints of Metal. The band members might have aged a little bit, but they still know how to deliver a great Punk album.