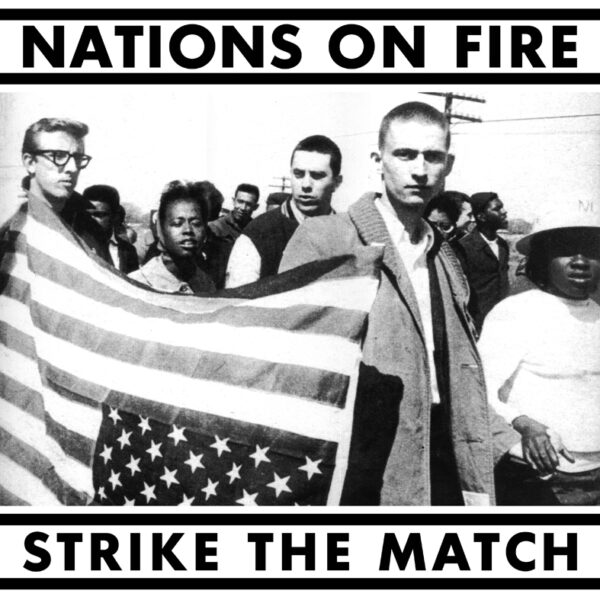 Refuse Records is proud to reissue one of the most important records of the European Hardcore scene of the 90’s ! Originally released in 1991 by Strive Records (sublabel of X-Mist Records), Nations on Fire “Strike the Match” LP became one of the best and most inspiring albums of the decade. This great-sounding material was recorded at Metropool Studios in Holland and at Westbeach Recorders in California (Bad Religion’s studio!). On this LP, Nations on Fire managed to capture the best elements of current hardcore from the USA, along with the aggression, energy and political awareness of European bands of the 80s. All of this was combined with deeply passionate lyrics and liner notes. These writings became manifestos of the political scene and of Straight Edge hardcore during this period. Their lyrics covered a wide array of topics: radically targeting racism and nationalism ( Put down that flag!”; “Striving for a master race – my fist in your face”); organized religion ( “No god – no prophet – no profits – no leader – no masters – no book of lies”); corporate interest in the creation of the European Union (“Europe 1992 is a joke”); exploitation and abuse of animals, while promoting social activity (“You can get involved, there’s a lot of social problems that you can solve”); straight edge as a personal choice (“It’s my lifestyle, it remains my choice”); inclusiveness in the hardcore scene (“Join the Brotherhood! Join the Sisterhood!”); and commitment (“Dedication”). These lyrics were both confrontational and encouraging, inspiring in listeners the need to get involved and to make changes. And while 2016 marks a full twenty-five years since the release of this album, it’s message is still valid, especially as we take into account the current political situation both in Europe and the world. There are many reasons that this album should still be readily available! This reissue on Refuse Records comes in a gatefold sleeve and includes a contribution by artist Peter Puype, lifelong ally of the band, and an additional booklet with an English translation of an interview from the German zine ‘Confrontation’, which was conducted during the NATIONS ON FIRE / BORN AGAINST tour promoting the ‘Strike the Match’ LP, as well as photos and flyers from this period. The music has been re-mastered by Smok (Studio As One, Warsaw) !