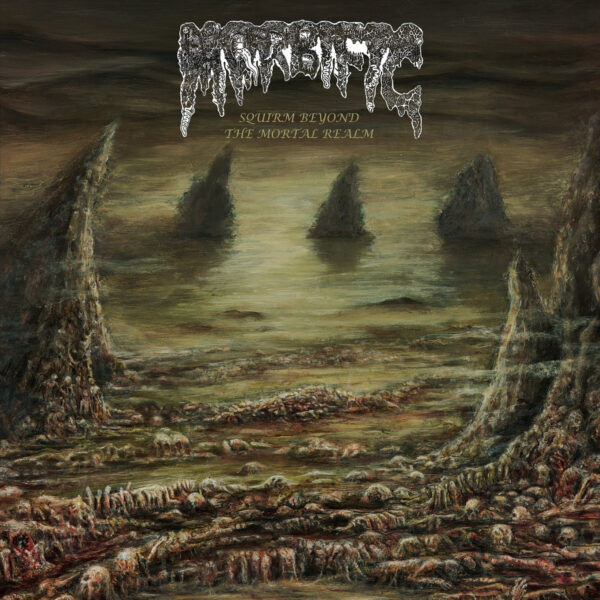 The highly anticipated 2nd full-length by this Finnish band. Morbific is a rotten-to-the-core Death Metal trio deformed in the filthy and profaned boneyard of Kitee in early 2020, featuring Olli (guitar), Jusa (vocals/bass), and Onni (drums). The band’s “Pestilent Hordes” demo was unleashed in the summer of 2020, and it rapidly gained them some following amongst the finest gourmets of the variety of festering, moldering and disgusting Death Metal that’s malignantly influenced by Autopsy, Rottrevore, Deteriorot, Mortician, Grave, Maimed, Undergang, Impetigo, and ancient Finnish masters of death and decay such as Funebre and Disgrace. Shortly after, in the spring of 2021, the debut full-length “Ominous Seep of Putridity” saw the odious light of day to unanimous praise by both the fans and the media. Now, it’s time to ooze some more pus again and make the second abscess an even more sickening ordeal to experience than any other before: enter “Squirm Beyond the Mortal Realm”. All too perfectly titled, Morbific’s second album is a slimy, sludge-strewn landscape where barbaric stomp and cyclonic vortexes get blown the fuck out with an almost demo-level feel. However, lumber under no assumption that this is accidental, or the result of budgetary constraints, or some such other nonsense. No. Morbific gleefully want to punish the listener with an uncomfortable experience that’s fit only for the deadest of diehards. And yet, open thine ears to such sickness and one will find that “Squirm Beyond the Mortal Realm” is even stranger and more unsettling than its absurdly raw aspect suggests; the riffs themselves here sound wrong, the bass sounds like nuclear fallout, and the perversely spacious mix allows supernatural horror to creep in as these sounds clash and slash the listener. Which is to say nothing of the wandering, tension-heightening songwriting itself… To restate the should-be-obvious, this is not trendy “Death Metal” for the masses! Peer deeply into the grim and grimy cover art courtesy of Chase Slaker, and perhaps you’ll begin to understand what awaits within Morbific’s “Squirm Beyond the Mortal Realm”. The first step into it will be your last..