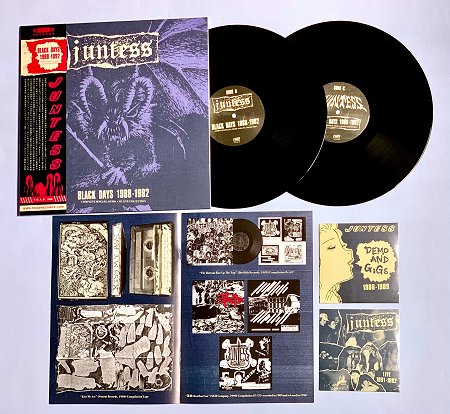 Solid black vinyl lmited to 250. “Black days 1988-1992: complete singles, demo and live collection”. Combining the best elements of classic Japanese Hardcore with a scorching Metal-infused guitar work as well as a solid rocking vibe, JUNTESS stands as one of the most under rated bands of the late ’80s to early ’90s wave of Tokyo HC. This ultra exhaustive anthology finally makes justice to the quality and originality of their music, collecting all their existing recordings: singles, compilation tracks, the rare “not for sale” demo 1989 and a very complete selection of live material, except the album “Under the red moon” that was already reissued on FOAD in 2017. A maniacal collection that reconstructs their history from the very first days to the final show: 1988 to 1992. Double LP + 2 x extra bonus CD’s, for a total of 86 SONGS! Comes in a thick gatefold jacket with OBI strip and 12 page full coloured booklet with rare photos, flyers, biographical notes and scans of their complete discography.
Detailed contents: “Knells for the past” 7″, “You were free” 7″, Split 7″ with Doctor and the crippens, “Not for sale” studio/live tape, songs from “The bottom rise up to the top” v.a. flexi 8″, songs from “Kakumei – best run fast” v.a. LP, songs from “Kiss my ass” v.a. tape, songs from “Office L.M.” v.a. tape, songs from “Who’s chained up to the dogs of outrage!!” v.a. LP. Bonus CD1: Demo and early gigs 1988-1989 / Bonus CD2: live 1991-1992 including the final show (mostly sound board recordings)