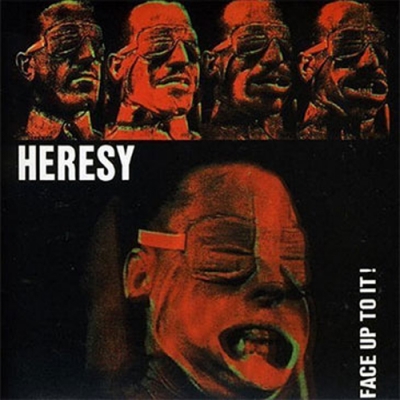 HERESY – Face Up To It LP

Heresy is one of the most influential UK Hardcore Punk bands ever to exist. From 1985-1989 the band were one of the leading lights of the rapidly expanding UK scene. Heresy’s back catalogue has been totally re-mastered by Kalv Piper and Steve “Baz” Ballam from the band and “Face Up To It” is the second of a trilogy of discographies that Boss Tuneage has released (along with 1985-1987 and 20 Reasons to End It All). This was the bands one and only album of which over 10,000 copies were pressed and sold throughout the world upon its release in 1988.

This re-issue also contains a bonus 11 songs taken from pre-studio home demos/rehearsals recorded prior to the album which are the first time these archive recordings have been released. The album is almost unrecognisable from in its new, digitally re-mastered version sounding a hundred times better than it ever has done before – and the best it will ever sound! Compiled with extensive sleeve notes from Kalv from the band, the repaclaged vinyl also contains dozens of unseen photos, tour posters and lyrics.