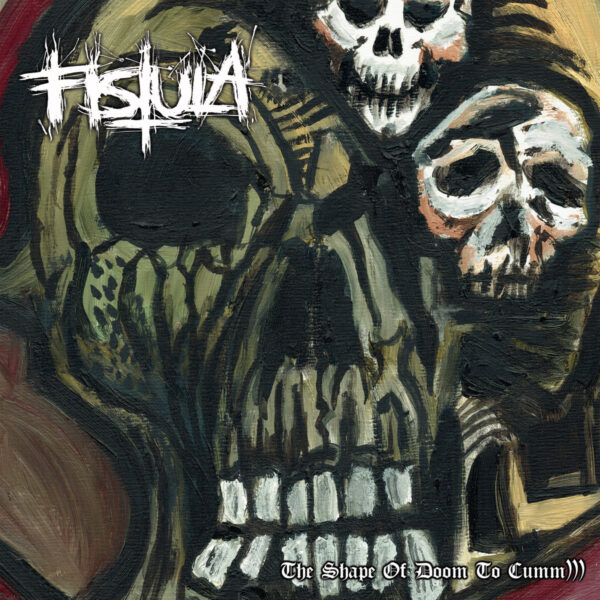 FISTULA – The Shape Of Doom To Cumm))) LP

https://patacrecords.bandcamp.com/album/the-shape-of-doom-to-cumm
“The Shape of Doom to Cumm)))” is dripping with sardonic hatred for scenesters and fad chasers, scrapping rusty barbed wire across the speakers as if to wound those who listen. They bring the noise, the hate, and will tell you to your face if there’s even a hint at being a douchebag.

“The Shape of Doom to Cumm))) LP track listing:
1). Serial Vapist
2). Promiscuity Ingenuity
3). Goat Brothel
4). Sabbath Wants To Do A Split with Me
5). Tough Guy
6). Black Maggot
7). Negative
The Review:
There is the sludge genre, and then there are bands that are sludge. One such band, and the only redeeming quality outside sports, is Ohio based Fistula. Known less for coming from the gutter than just simply crashing on its couch all the time, Fistula simply drips with the scuzziest noise outside a grindcore club. They bring the noise, the hate, and will tell you to your face if there’s even a hint at being a douchebag (oh track one, “Serial Vapist“, you scamp!); and to make matters worse, they just dropped a huge slab of greasy, queasy fuzz onto the scene: ‘The Shape Of Doom To Cumm)))‘!
Laden with everything they have come to purvey, ‘The Shape Of Doom To Cumm)))’ is an ode to all those bands and “artists” who seem to think an Orange amp and some gain make you something to give two rats asses about; hint: you matter not to the Void. “The Shape…” is dripping with sardonic hatred for scenesters and fad chasers, scrapping rusty barbed wire across the speakers as if to wound those who listen. Fistula deliver punk energy and some (heavily shop-soiled) bluesy riffage to bear, as on “Sabbath Wants to Do a Split with Me”. They pull some truly Sabbathian riffs and tones out of their bag of tricks and rampage all over traditional Doom, while paying some heavy respects to the Iommi. The whole album just reeks of Doom, alongside their more signature scuzzy sound, and it’s definitely at the forefront of tracks like “Sabbath…” and “Tough Guy”, the middle siblings of the album. Classic Fistula fans (and there must be millions) don’t be down trodden, as they still keep their fast paced, gritty sound throughout the album (tracks “Goat Brothel“, “Black Maggot“, and “Negative“, which will have you in a pit in no time), interwoven with that heavy, fuzz-filled doom that they swear will CUMM))) (“Promiscuous Ingenuity“, definite blankets of fleas, slow and fast). They haven’t lost any edge in delving into the lo and slo, it’s just simply a slower drag of their jagged knives across your wrists. Fistula has created a maelstrom of binge-fueled hell, and by god you need to bring more beer.
Along the lines of lyric content, Fistula makes Metal Hate Again with just about every track. They pick apart whatever and who/whomever they wish, like on “Serial Vapist” as they eviscerate the whole vaping phenomenon and the Hipster trends; and “Tough Guy“, where they tackle internet tough guys who want to talk bigger than their britches fit. They call them out and tell them to come on or fuck off. And they even tackle the recent popularity of splits and the bands who hang off the undercarriage of the aforementioned band. Overall, they pretty much swing a whisky bottle (empty, of course) at everything popular and current, leaving no room for argument or misinterpretation as to where they can shove all those trends. The closing track, “Negative“, also provides another Fistula toe tag: sound clips taken from outside sources, highlighting the barb-filled philippics like marbling in a good steak.
Fistula has absolutely nailed it home with “The Shape of Doom to Cumm)))”, bringing with them an outlet for the stupidity running rampant nowadays. This album just further cements them as a band to be reckoned with, and one you should actively seek out and support, if they are spreading their filth, filthy sound out near you; They are currently on an European tour (as of this writing), so go check to see if the outbreak is stopping near you.”