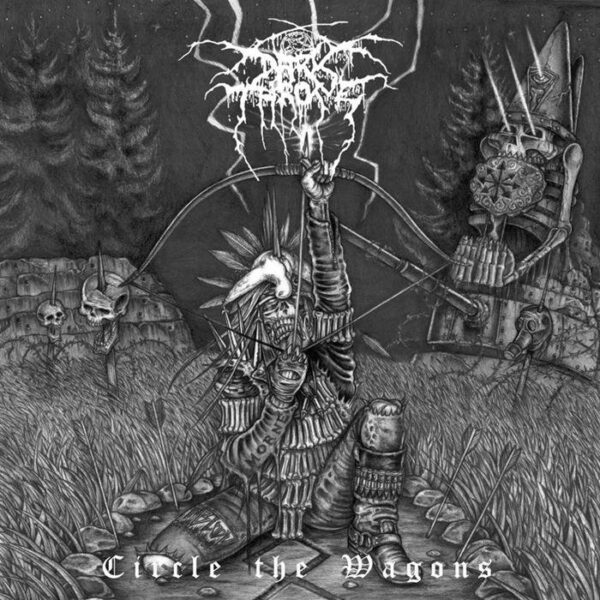 Darkthrone are a legendary name in metal, inspiring countless bands throughout the years as one of the leaders of the Scandinavian black metal movement in the early 90’s, alongside other greats such as Burzum, Immortal and Mayhem.
In 2010 the unrelenting Norwegian duo delivered a new feast of metal and punk. From their thrash and death beginnings to their ascension to the pantheon of black metal greats, Darkthrone have always refused to stand still. They continue to embrace and explore their roots and capture the real spirit of sonic greatness on CIRCLE THE WAGONS; recorded by the band themselves at Necrohell II studios.
Darkthrone sail against the tides of trend and disposable metal; uncompromising and defiant as ever – an ideology expanded upon by Fenriz when explaining the meaning behind the title:
The new metal decade starts with our album. It is a message to the Invaders of our metal domain to circle their wagons!!!”
With our own brand of heavy metal/speed metal-punk we are a constant ambush on  the modern overground metal traitors. Join us in our fight against instant gratification…. and let’s see who stands when the smoke clears…
Album by album we gnaw away at the overwhelming mass of so-called raw metal out there – well, the only time i saw something raw wrapped in plastic was when it was dead meat. And so in the long run, all raw bands with old raw sound wins – and your plastic paradise instant gratification sound vanishes with time.
Die hard! “I hate, therefore I am” – Fenriz
Artwork for the album comes once again courtesy of Dennis Dread, notable for his talents on previous Darkthrone albums, F.O.A.D and 2008’s Dark Thrones and Black Flags, as well as for US greats, Abscess.