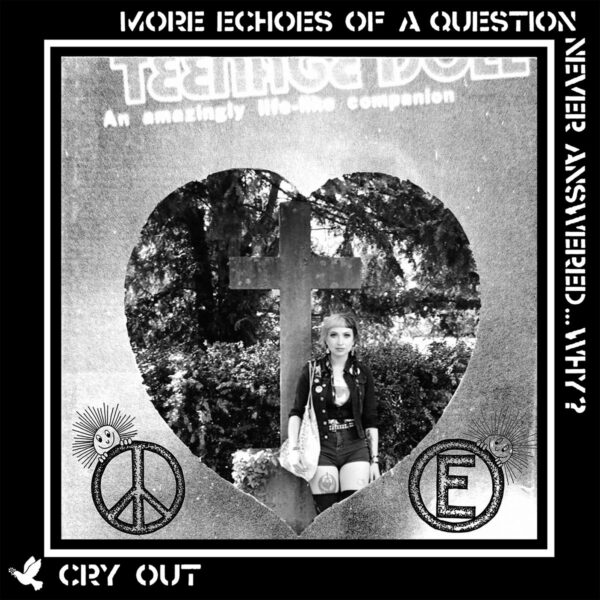 CRY OUT – More Echoes Of A Question Never Answered​.​.​. Why? LP

Cry Out is the solo project of Halifax, Nova Scotia artist Rosie Davis, who also was in the punk group Vixens. Tragically, Davis passed away during the production of her debut More Echoes… and with the blessing of her family the record was completed by her label La Vida Es Un Mus. This record is hitting me hard and not just because it reminds us of the human fragility of our friends and fellow travellers, specially those in our extended DIY network, but also because it’s so full of electricity and life.

With artwork clearly influenced by Crass records and the anarcho spirit of the early 80s, it’s a pleasure to peel open the sleeve and blast the music loud and clear. Your Shame Not Mine sounds like the more abstract Crass pieces before the coda comes in, steering it more into a Honey Bane by way of Y Pants vibe, albeit with loads of scratchy, echo guitar that throws the whole righteous stew into the gothosphere. War Aesthetic brings the thuds, all drum machine and searing guitar riff, like a much more DIY Vice Squad, it’s peace punk by way of a crying Tascam covered in basement goo. Fucked Silly, probably the best song title of all time, shoves a rocket up the proverbial with a Fluxy kind of speed punk (before they flew off the deep end) and guitar clearly improvised and slathering all over the top of it. The closer of this EP, Garden Song, has an austere, gothic punk vibe that drives on through the foggy guitar clouds with a arachnoid bassline and reverb-caked vocals from Davis. Absolutely love how those guitar washes crash in on you, edging out all thought.