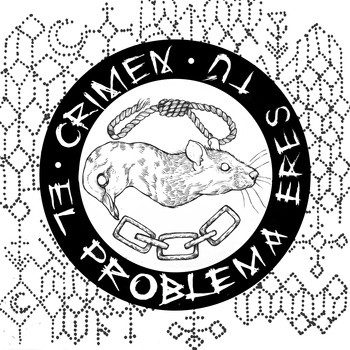 2nd full-length from this Mexico City punk band. Apparently this was supposed to be released on vinyl in time for the band’s recent US shows, but there was some kind of problem and I guess now this cassette is the only way you’re going to get to hear this release. On first listen I thought maybe I put the wrong tape in the player, because this is very different from the raw d-beat hardcore that appeared on the band’s previous 7″. Instead, this is tuneful punk with post-punk touches, much more in line with the history of classic Spanish punk and hardcore. There are still some hardcore elements as well, and at times some of the songs are so different in style that it can sound a little schizophrenic, but honestly I’m into that… too many bands nowadays only write songs in one specific style and it makes both listeners and the bands themselves burn out way too quickly. This comes at punk from a whole bunch of different angles and is all the better for it. If you’ve been following the recent wave of great punk out of Mexico you’ll want to check this out, as these bands have a vitality and sense of now-ness that is unmatched by pretty much any scene in the world.