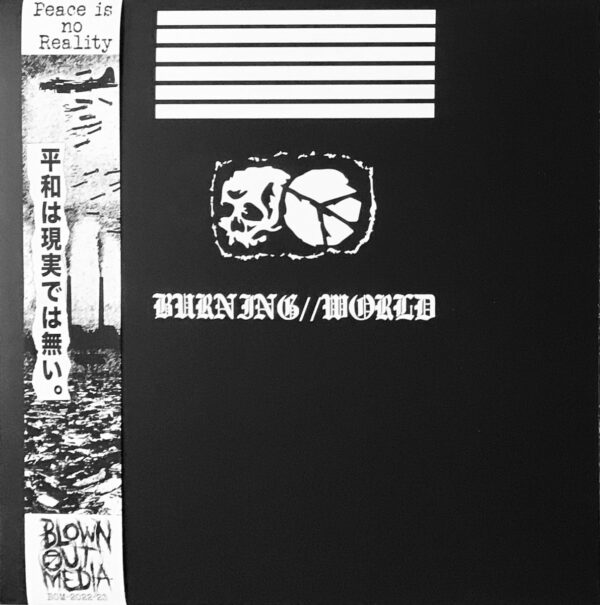 BURNING//WORLD – Peace is no reality LP (US import)

The 2020 limited edition 50 1st cassette became a big topic among fanatics, and this work follows the 2021 EP that was recorded as it should!

Even if a style that has already been imitated many times and fallen into a state of cannibalism, if it is born with a thorough and uncompromising attitude, I think it is very rare that it will regain its novelty again, but isn’t this BURNING //WORLD album just that?

The perfect early DISCLOSE Worship of Noisy D-BEAT RAW PUNK heard on the demo EP is now more amplified by its nihilistic horror, and this group of songs that push through with thoroughly laid-down noise and disturbing and hopelessly heavy riffs are obvious to those who are fanatics, including me, though they haven’t done anything new!

It can not help but feel the same thing that DISASTER, which was influenced by DISCHARGE, gave an impact that surpassed DISCHARGE at that time, a D-BEAT RAW PUNK CLASSIC following works such as NO FUCKER, DISPOSE, DISEASE, which combined the destructive power of DISCHARGE ”WHY” and the blackness of Canada DECONTROL while under the influence of DISCLOSE, is now here, limited 300 copies!！
-Jacky at Revenge Records

When @blownoutmedia sent me this here Burning//World record for review, it was with the caveat that if I didn’t like it I could do such things as toss it in the trash or leave a scathing review. I only post positive reviews of things I enjoy, putting my best New Balance forward, as I am a judgemental person with a short fuse in real life and while I try to avoid the wrong blend of internet and reality, I have had a strong push as of late to bring the hate to the digital realm. While I may someday pull the trigger on that Super Soaker full of diarrhea, it has no place here as this is one of the best modern d-beat records I can recall hearing. This 45rpm 12″ is so fuvking powerful the Hoover Dam isn’t holding back water, it’s pissing its pants. INSANE low end, furious howling in space vocals, an almost symphonic feel without any stadium crust bullshit (fear not, it’s as raw as getting fuvked by a skinless hotdog), a full use of the entire sonic palate, riffs and basslines that are visceral punches to the kidneys and textural washes, and musicality as far as a d-beat band would perform it bleeding in and out of a tornado of sound. I recently experienced a very particular type of vertigo that involved my head feeling like a bodily limb that had fallen asleep refilling with blood and my vision refilling with color as I woozed about recklessly. Imagine that happening again and again over 11 tracks while on a treadmill. Money. #dbeat #dbeatrawpunk #noisenotmusic #punkrecords #punkvinyl #hardcorerecords #hardcorevinyl #blownoutmedia
-IG @cymtrymanx

Raw punk and d-beat bands are a dime a dozen, but not every outfit cuts the mustard. Worthy groups have to be au fait the rot, one with the grot, and they have to be well versed in life’s trials and miseries. That’s not the end of the tale, though. Those bands have to project all of life’s unjustness and wretchedness — and the boiling rage it inspires — into the earholes of unwashed fans, and they have to make us believe it too.

New Jersey punks Burning//World do an excellent job of selling their shit(noise). I don’t mean ‘selling’ in any commercial sense. I mean Burning//World hammer their horrible truths home with a shedload of authenticity. The band channelled abundant anger on their 2020 debut, What Brings Tomorrow?, which was released by raw punk specialists — and home to raging bands aplenty — Blown Out Media. Burning//World draw inspiration from the unhinged oeuvres of bands like Disarm, Disclose, and Framtid, and while it feels odd (but not really) to praise Burning//World for making such a dissonant racket, credit where credit’s due, the band make great fucking noise.

Burning//World’s latest obnoxious release, Peace is No Reality, affirms their ability to write genuinely murderous-sounding music. Peace is No Reality is a harsh, migraine-inducing maelstrom, with crashing waves of super-abrasive guitars, guttural barks, and thundering bass and drums wrapped around fierce critiques of myriad social and political ills. It’s a ferocious wall of noise, but what nudges Peace is No Reality over the line (turning it into an essential release) are two things.

First, the LP’s sequencing is downright homicidal; throat-gripping track after throat-gripping leaves zero chance to catch your breath. It’s intense. Secondly, while Peace is No Reality is acidic enough to melt the skin from bone, everything here also feels armour-plated in its core strength and impact.

Again, it feels incongruous to ‘rank’ music that rails against the hierarchical nature of modern capitalism and consumerism, but fuck it; Peace is No Reality is a shoo-in for one of 2022’s best raw punk LPs. It’s a scorching release purpose-built to soundtrack the worse of times (i.e. right now). Kudos to Burning//World for bringing their very own moniker to life.
-Tomorrow’s Ashes #3.5
www.sixnoises.com/noise-1/tomorrows-ashes-35