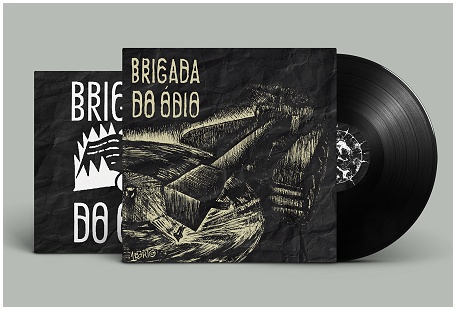 Solid black vinyl (180 grams) limited to 250 copies.
NOISECORE FROM 1984!!!!!!! The longly awaited full discography by these pioneering Noisecore Punks from Brazil, among the earliest and most annihilating sonic terrorists of the ’80s! These maniacs were responsible for a crazily fast Chaos-Thrash long before the British explosion of Grindcore or the arrival of bands like AxCx, Sore Throat and the likes, and they were equally extreme and out of control… the blasting tornado on their split with OLHO SECO from 1985 was way ahead of their time in terms of outrageous speed and ear-splitting distortion. This exhaustive discography LP includes the following: Split LP with OLHO SECO (both versions. 1985), INFRATORES (pre-BRIGADA DO ÓDIO! 1984), s/t EP (2002) and “Diáspora” EP (2006, for the first time on vinyl!). 50 TRACKS!! Comes with a booklet with rare photos, original artworks and biographical notes written by the band. Co-released with Insane Noise Distro from Brazil.