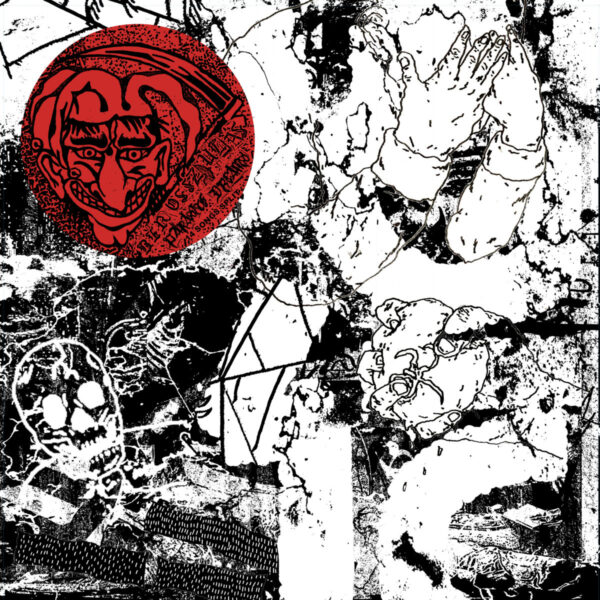 This album will poke into the open wounds. Fourteen tracks of ferocious hardcore and maddening death punk coming from Budapest and Vienna (and Prague) on one lp. Modern, but raw weird punk of Berosszulás sounds like all the filth from their capital just got washed down to their rehearsal room and it gots to be wiped out with all their arsenal: speed (and speed), protesting lyrics and fierce and fast guitar riffs which makes you feel like streets of Budapest is rather New York. But this is no trend. Berosszulás has been out here for years (i.e. demo discography released via Stone to Death many years ago), playing and promoting tons of shows in their area. They are part of Hungarian punk underground represented by collectives such as Szegyén Kazettak and great bands like Norms, Eszeles or Iron Steel. All this is worth your exploration time.

Other side of this split belongs to Parasite Dreams. This lefty and oily duo, practicing in an old abandoned gas station in Vienna, develops the sound of late 70’s doom metal in the context of modern hardcore punk scene. Think of St. Vitus or Pentagram, but if they actually cared. Bonehead mid tempo punk metal mixed with raging lyrics dealing with modern suburban capitalism, sex crimes and drug craving scenesters. Based in the capital of Austria, these guys are a great introduction into the strong modern movement of committed Austrian bands such as FS Massacre, Bobby Would, Autor, Pitva, Concorde or Death Racer.

This split LP is released via Stoned to Death in edition of 246 copies.