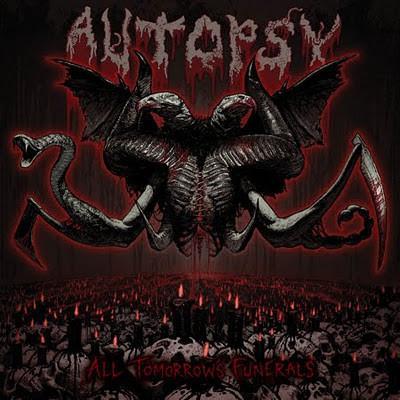 Essentially, the band have reprinted and remastered all of their short form EP releases down through the years, an obvious boon targeted at younger fans who might have difficulty in tracking down the original copies without paying exorbitant prices on auctions or in specialty record shops. They’re placed on the disk in a reverse chronological order covering roughly tracks 5-21, so The Tomb Within (2010) is followed by Fiend for Blood (1992) and Retribution for the Dead (1991). Having already covered these releases individually, I will say that I got a lot more out of the Fiend material than anything else in its new format, which sounds a little cleaner while losing little of its repulsive, thick and frivolous Steve DiGiorgio bass or the ghastly, loose-structured sense of fun that it originally conveyed. More interesting by far was the inclusion of the two tracks from the Horrific Obsession single, recorded in 2008 and released early the following year.