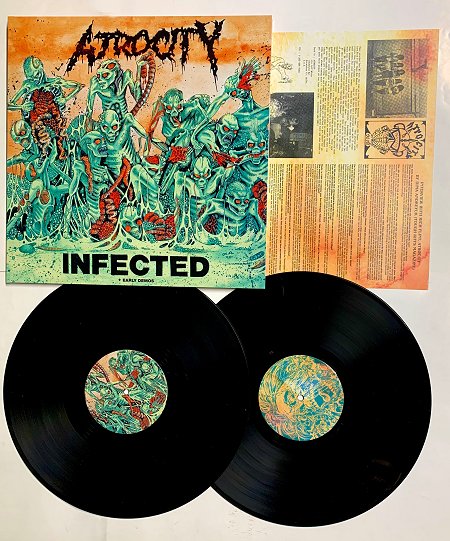 “Smashing in your fucking skull, like a ripe fruit – Brain begins to haemorrage, it’s breaking at the root“!! The grinding masterpiece “Infected” by Connecticut’s sonic butchers ATROCITY turns 30 and gets a special quality centered re-release on F.O.A.D. Records, enriched by an extra LP featuring two early Demotapes (1986-1987)! These blood-thirsty maniacs were responsible for some of nastiest Death/Grind, perfectly combining the unmatched intensity of the ’80s US Death Metal tradition with terrifying old school Grindcore fury. The first comparison that comes to mind when “Infected” starts to rip your turntable to shreds is obviously REPULSION! This double LP includes an extended version of “Infected” adding a bonus alternate version of the song “Infected” that was only included on their “Hatred birth” EP and their two demos “Toxic death” (1987) and “Ravaged by disease” (1987). 32 SONGS of gut-mangling Death/Grind brutality! Housed in a gatefold jacket displaying rare photos and original artworks, also including an insert with zine excerpts and an interesting interview focused on the band’s early years. Watch the trailer HERE