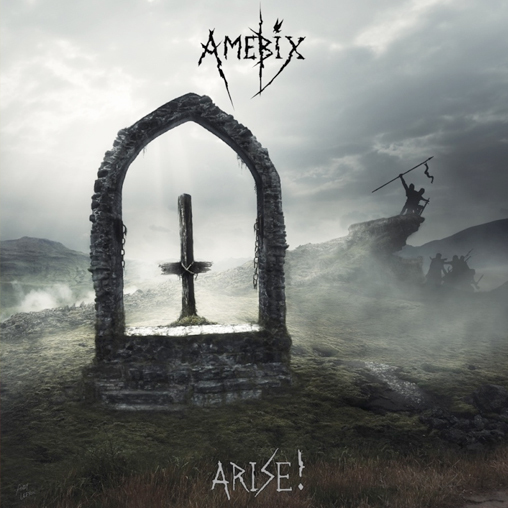 Arise was a turning point for Amebix,it was an album that had half its body in Bristol and the rest in Bath, coming together at a time of transition.

We had worked on material for the album during the last days in Bristol,before moving out to Radstock, a small mining town close to Bath. Virus was still the drummer,so the songs all had his particular style of tribal drumming, something that had suited the earlier no Sanctuary songs, but it was beginning to sound repetitive , particularly since we were listening to a lot of Metal bands at the time, Accept, Mercyful fate, Manowar,Iron maiden  and a whole lot of smaller and less well known bands.

We were pointed towards a squat near Bath railway station and a young man called spider,who was at that time playing with  local punk band SCUM, Virus had lost interest in the music and moved back out to the Nailsea area, so we were stuck with the task of finding a new drummer. Spider’s  enthusiasm was infectious, he arranged for us to use a practice space at Stoat Hall in Hampton Row, a punk/hippy house and home to Smart Pils and the Hippy Slags. We would meet up once a week and practice in a small room directly under Rich’s bedroom (Richard Chadwick now of Hawkwind) whilst he calmly tolerated the rumbling floorboards and howls from the basement.

Spider introduced a more solid sound to the material we had brought, we were gradually learning how to make a song, and to drive it along with weight and power. Things were beginning to really click.

Like all our recordings, we financed it ourselves and handed over the results to Alternative Tentacles U.K offices above Rough Trade records in London. Jello Biafra had previously offered us a label to release on when he visited the studios during our No Sanctuary recording sessions years earlier, so we put the album on their  table and waited…..

News came back that A.T were not at all happy with the sound of the record, it was veering into forbidden territory at a time when there was a very clear delineation between punk and heavy metal music, but perseverance paid off and it was released to a smattering of applause and a very small audience that appreciated it. Nowadays the two styles of music are pretty much synonymous in many respects but Amebix was really one of the first bands to create the ground for that fusion of styles, and to be fair is also now recognised for that small contribution to genre blending.

Arise is still a good record, Spartan and loose,but honest for all that. Our humble attempts at creating a heavy monsterous sound without the widdly solos and spandex,whilst also keeping the apocalyptic vision of the earlier work alive.

It is difficult from this distance to appreciate how strange this record was when it first appeared, not fast enough for the punks, too primitive for the Metalheads, but it has gradually gained its audience, with Max and Igor of Sepultura  proudly citing it as an influence for their own works, many others took from this too, with improved musicianship,technical ability and overall production, but this is the album at the root of the tree, take it as you find it, raw, unsophisticated but above all Honest.