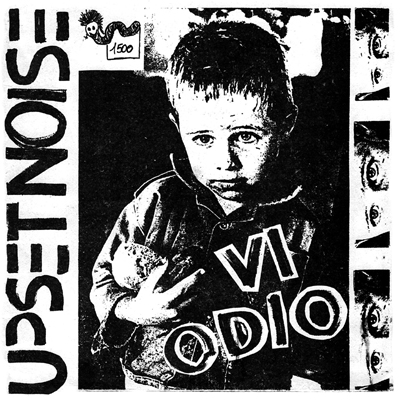 This split is another rare gem of the Early Eighties Hardcore, Punk scene, very hard to find in a good condition and for a fair price, originally released in 1984 by the bands in a total D.I.Y. way, the way it should be, with all the imperfection and mistakes that makes a Punk release really likeable. All ten songs (five from each band) were recorded in novembre 1983 in the Oasis Studio, in Goriza, Italy.

UPSET NOISE were formed in Trieste, Italy in the Early Eighties and in their beginnings they played raw, pissed off and faster Hardcore, Punk in the vein of NEGAZIONE, INDIGESTI, DECLINO, … . On this split EP the present their first recordings on vinyl, really raw, primitive and aggressive material, totally different from their Crossover, Thrashcore sound they played in their later years.

WARFARE ? are a very poltical Punk band formed in the year 1981 in Goriza, Italy, they didn´t play that typical frantic and fast italian Hardcore, Punk like many others of their country did at that time, WARFARE ? were more influenced by Anarcho Punk band like CRASS, CONFLICT, FLUX OF PINK INDIANS, … . On this split EP the band plays more mid-tempo Anarcho Punk with dual male vocals and also some experimental parts were included into their sound.

The UPSET NOISE / WARFARE ? Split EP originally was released in the year 1984 by the bands themselves, this here will become the first legit re-release on the original 7 format.