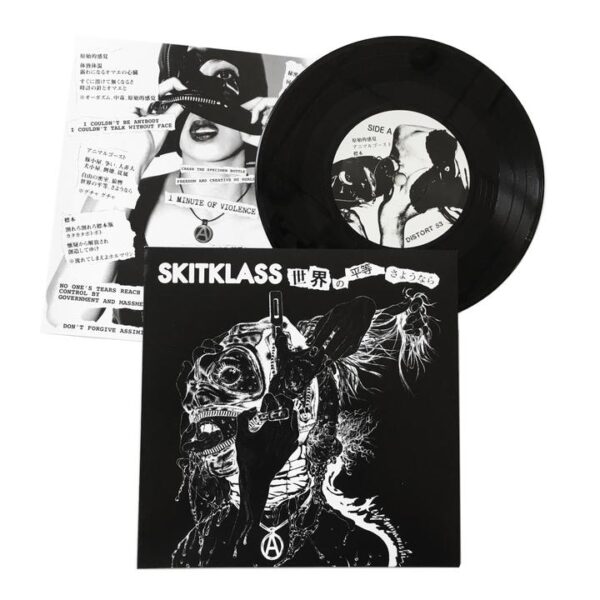 Skitklass from Tokyo are back with a new 7″ titled GOODBYE WORLD EQUALITY. It contains 5 tracks of pure Ra Punk! 1 minute of violence says it all!

Our take: Japan’s Skitklass has been bumping around for a few years now, releasing a steady stream of cassettes and vinyl that somehow fell just off the edge of my radar. A few months ago I listened to their debut full-length, Primitiv Känsala, and it blew me away. After listening to that record a bunch and spending some time with this latest 5-song EP on Distort Reality, I can sense them charging toward the top of my list of favorite current punk bands. Skitklass sounds like a straightforward and raging Cimex / Shitlickers-style d-beat band, but with one important difference: rather than using a guitar sound that is beefy and metallic or noisy and blown out, their guitarist has a sound that’s scratchy and minimally distorted, more in line with garage-punk bands like the early Hives stuff or Henry Fiat’s Open Sore. It’s amazing how much this subtle difference changes the vibe. While there is, perhaps, a hint more punk catchiness in some of their riffs that you might expect from your typical d-beat band (which comes out a little on the third track, “Specimen,” here), most of the riffs, vocals, and songwriting style are pure Discharge worship. However, as modern d-beat as a genre grows a little stale and formulaic, Skitklass sounds urgent and explosive. Maybe it’s just that they’re a great band and their unique guitar sound is just a hook to make them stand out from the d-beat crowd. Whatever the reason, this band rules and this EP is a certified ripper.