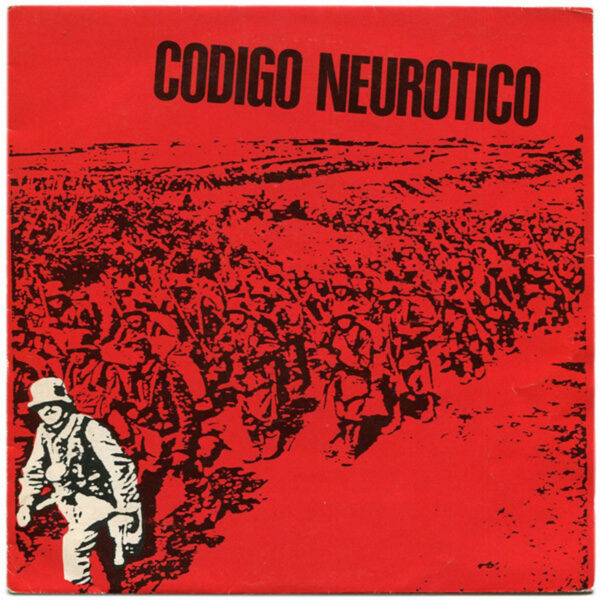 Repress of the debut EP from this band formed in Terrassa (Barcelona) in 1982 by Jorge, Lolo and Sergio. Recorded that same 1982 and released one year later b Domestic Records, almost 40 years after come back to the hand of everyone with their 5 great punk anthems of crazy, fast and badass punk songs, a real hims of the history of spanish punk with songs like “Pega a tu mama”, “Quema tanques” and their absolute hit “Las malvinas” without forget the songs “Totus tous” and “Cotolengo” opening and closing this EP

Our take: First ever vinyl reissue for this killer Spanish punk record from 1983. I put this EP on my want list years ago but haven’t found a copy, so it was a treat to get this reissue and spend some time with it. Codigo Neurotico started in Barcelona in 1982, released this EP in 1983, and (according to some quick research) put the band on pause so the members could complete their compulsory military service then restarted the group and released a string of albums beginning with 1987’s La Maqueta Roja. Many 80s Spanish punk bands had more UK ’77 in their sound than the worldwide scenes that more fully embraced hardcore, and Codigo Neurotico fit that mold. Tracks like “Totus Tous” and “Las Malvinas” sound a bit like 70s European punk bands Ivy Green, the Kids, or Lost Kids, while tracks like “Pega a Tu Mama” pick up the tempo to hardcore speeds without losing the catchiness. The production is great, the energy level is high, the songs are awesome… this is just an all-around great punk EP and I’m very stoked it’s available again. Even better, Discos Enfermos did a bang-up job with the reissue, featuring great sound and a great looking reproduction of the original sleeve.