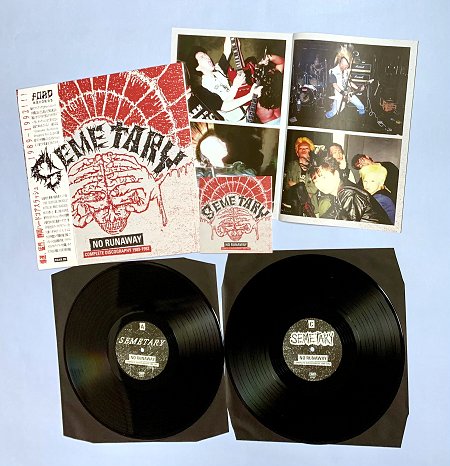 Shizuoka City Hardcore! Another rare and nearly lost gem brought back to light by your tireless F.O.A.D. archeologists. Ripping fast, anger-fueled Hardcore from a city that spawned some of the most ferocious HC warriors in Japan! Complete discography 1989-1992 including their 3 highly sought after demotapes contended at exorbitant prices by the craziest collectors. 32 songs of speed driven Thrash-core galore of the most raging type, featuring among the ranks the brother of Akiyama of Forward fame (and previously in The Rustler, Swindle Bitch, Zamza etc). For those who aren’t total insiders, maybe you’ll remember their insanely fast track on “Unknown Hardcore Drunkers Vol.2” 2×7″ (MCR Company) – all the stuff included here is of the same level of excellence and fury! Double LP in a thick gatefold jacket with OBI strip and 20 page colored booklet full of photos, flyers and scans of the original releases. Bonus CD with the same contents as the double LP, for the digital freaks! Watch the trailer HERE