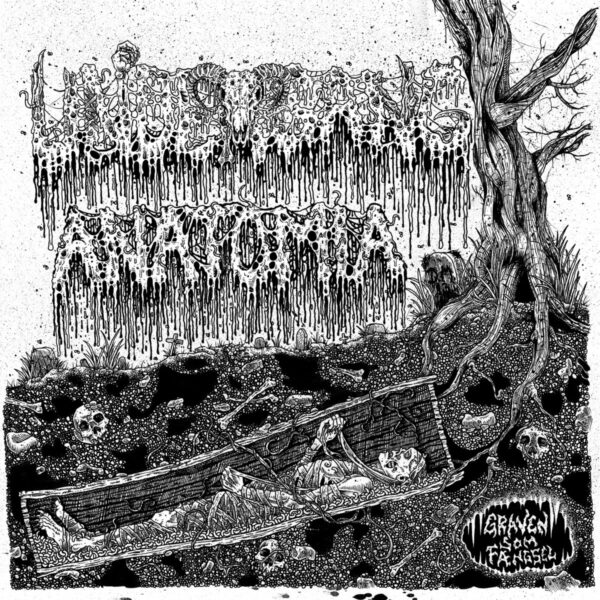 A glorious testimony to both bands’ shared history, this 10″ split harks back to when the entities first met: the sacrilegious madness and unholy intoxication of 2010’s inaugural Kill-Town Death Fest. Undergang offer forth an eight minute hymn of atonally disturbed churning hatred for your vomitous displeasure, exhumed from the crypts of 2011 and previously unreleased. Over the course of three LPs and over a half-dozen demos, splits and EPs, the grotesque Danish threesome have crafted a dense-yet-spacious sound of unique underworldly horror. Hypnotic and miserable, their trademark unutterably guttural vocals, disgustingly down-tuned bludgeoning assault and bulldozer percussion sounds like something found in a sewer that was bricked up and abandoned in the last century. Joined by Tokyo mutants Anatomia, the veteran Japanese death/doom coven fittingly present a likewise-unearthed curse from their former incarnation as a three-piece in 2010. Magisterial and ominous in a spectre of haunting disdian, this stand-alone monument to decay is another almost-eight-minute epic, arrogant and disdainful in its splendid wrath. The entire festering mess is suitably housed in simply dreadful artwork courtesy of the perverted mind of Undergang’s D. Torturdød. Bandcamp