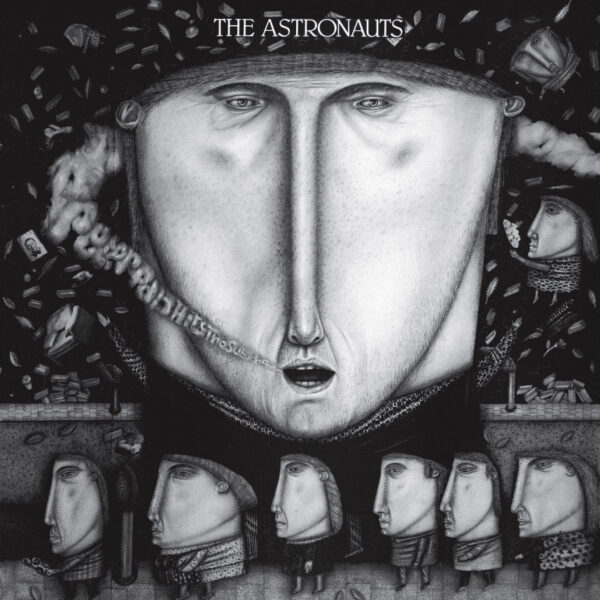 MUS44 THE ASTRONAUTS – Peter Pan Hits The Suburbs LP
Reissue of this long lost masterpice from 1981 originally released by Bulge / Genius records. The Astronauts were (and are, after close to 30 years and a history of lineup shifts only bested by The Fall) the definitive psych-punk ensemble, though even that title doesn’t do ’em justice. Their sound culminates the post ’77 punk dabblings of head forbears Twink (his ‘Do it 77′ single and The Rings’ ‘I wanna be free’ platter), Nik Turner (the outstanding Inner City Unit and the ‘punkier’ late 70’s bits of Hawkwind) and Daevid Allen’s planet Gong (with fellow acid-punkers Here and Now) all woven in with an earlier Robert Wyatt / mellow candle-y psych folk vibe… While not sounding like any of those things at all. Get it? The album’s range is gigantic: from dissonant punk a la Fall (‘Everything stops for baby’), to epic progressive folk (‘Protest song’, ‘Baby sings folk songs’), ditties (‘Sod us’), hard-rock (‘The Traveller’), pop (‘How green was my valley’), garage / surf (‘Still Talking’), industrial (‘How long is a piece of string’), and set to arrangements that employ synths, flute, saxophone, and strays into progressive or even free-form / psychedelic sections. The icing on the cake is the mature statement of the lyrics, a cynical and bitter exploration of the lives of simple men, miles away from the generic horror / punk overtones that permeated most of alternative albums at the time.