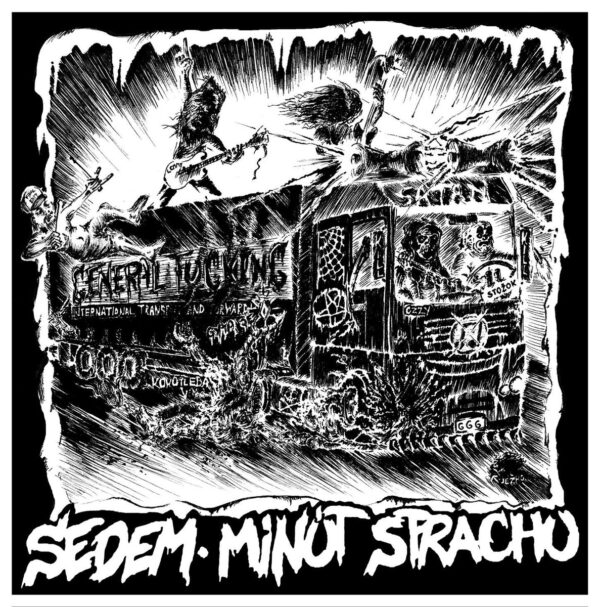 I’ve been in touch with Rado of SMS for years through trading and chatting shite on the net, and he’s one of the most clued-up, cool guys I’ve ever come across in the scene. A few years ago I was hard up, had lost a ton of cash after getting ripped off pressing a disastrous record, and frankly done-in with wasting all my time and effort into the black hole that is running a DIY label, when out of nowhere came a package from Rado with a note: here’s some stuff from my label, sell it and hopefully make a little bit of cash back!”.

Well, tear wiped from my normally glass eye, now he’s got a band on the go it’s time to repay a fucking ace human being by releasing their first full-length (!) recording, and what a belter it is!

If you’ve been paying any attention to noisecore in the past few years, Sedem Minut Strachu (Seven Minutes Of…..?) have been one of the main bands on the scene, releasing tons of split tapes and 7″s with a loads of bands. They’ve got a totally rehearsal room sound, but aren’t just total blurr-merchants. There are riffs going on here! Absolutely I can hear 80s grind as a massive influence. Maybe even some old death metal creeping its way in there too…Pungent Stench maybe?

This record comprises a ton of short blasts on the first side, and on the flip is ostensibly a free-form “jam” that has slow bits, fast bits, a mouth organ (!) and what sounds like an animal being run over by a lawnmower. For the last couple of minutes it even goes into lounge-jazz territory. It’s absolutely fuckin brilliant.

Noisecore is a genre that’s suited to the 7″ format foremostly in my mind, but at around ten minutes a side and varied enough to keep it interesting, this works just perfectly. Czech it out!

200 copies, poster sleeve with insert in a thick PVC outer.