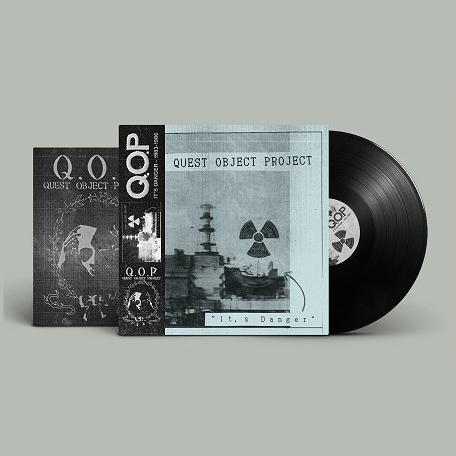 BLACK VINYL PRESSING LIMITED TO 300 COPIES.
Q.O.P. (Quest Object Project) was one of the first Japanese bands to combine Metal and Punk in a very peculiar way that would later evolve into a solid trademark for several bands from the Tokyo area. They were formed in 1983 by Dr. Euro, also drummer in the legendary HC/Punk unit THE EXECUTE, from which a couple members created GASTUNK. Musically, this release features an aggressive form of speed metal with NWOBHM influences and an intense punk overtone. The production is raw and unrifined adding a Punk-tinged feel to the whole thing. To make it simple, you can hear influences of Motörhead, Tank and Warfare on their Metal side, and so far as it concerns their Punk approach, GBH and Discharge are the first comparisons coming to mind. Euro’s drumming is tight and solid as always, also performed well is Kasuya’s bass, but the standout member is easily Satoshi Mutoh, on both lead vocals and guitar. He possesses a solid range, opting to sing clean vocals in a higher octave primarily, though he handles singing in a lower range just as well. Satoshi’s guitar work is also very good, boasting heaps of catchy and creative riffs at every turn, as well as flashy aggressive solos on nearly every song. Q.O.P.’s discography consists of 2 demos: a self titled tape (1985) and It’s danger!” that was the re-edition of the first one adding two more songs from a different studio session. Obviously, this LP includes all their existing recordings (the 10 songs from “It’s danger”) freshly ripped from the original reels by Euro himself and specially mastered for vinyl at Toxic Basement. This is hands down the best sounding version of this Metal/Punk gem that will both entertain those into Japanese classics like G.I.S.M., R.U.G., Rommel etc and those who are simply looking for a solid piece of primordial SpeedMetal/Punk aggression. Includes an 80s-styled booklet with ultra-rare flyers, ads and photos and an OBI strip with liner notes.