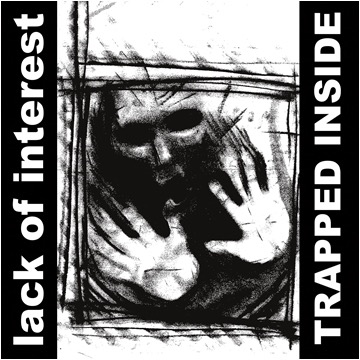 LACK OF INTEREST – Trapped Inside LP

Reissued after many, many years of not being available. Originally released on Slap A Ham Records. Deep Six made 500 of these. About 6 minutes shy of a million years after their formation the Southern Cal gods of thrash violence finally rip the entire universe a new one with their debut long player. It’s about time guys. LACK OF INTEREST are the purest old school style thrash band embraced by the power violence scene. They are strongly reminiscent of early eighties hate core legends like NEGATIVE FX and NEGATIVE APPROACH. They have the same intensity, the same rawness, the same anger and the same classic vibe. Trapped Inside” features newly recorded songs that span most of the band’s career including their calling card “My Life” which is THE thrash anthem of the nineties. There are 24 tracks on this puppy and a good half of them run less than thirty seconds (only three of them break the one minute barrier) consequently this album kills with a speed and power not unlike being strapped into an electric chair. This is the band and this is the album that you can cram down the throat of the next jaded old fart who tries to tell you that “punk is dead”. They have a strict policy against headlining shows. Bob(Deep Six,To The Point), the drummer, is the sole constant member. Mike is the original vocalist, but only performs with the band on occasion. Vocal duties nowadays are mostly handled by Rick. The current lineup includes Kevin from Fetus Eaters on guitar, Chris Dodge on bass, Rick (and sometimes Mike too) on vocals, and Bob behind the kit.