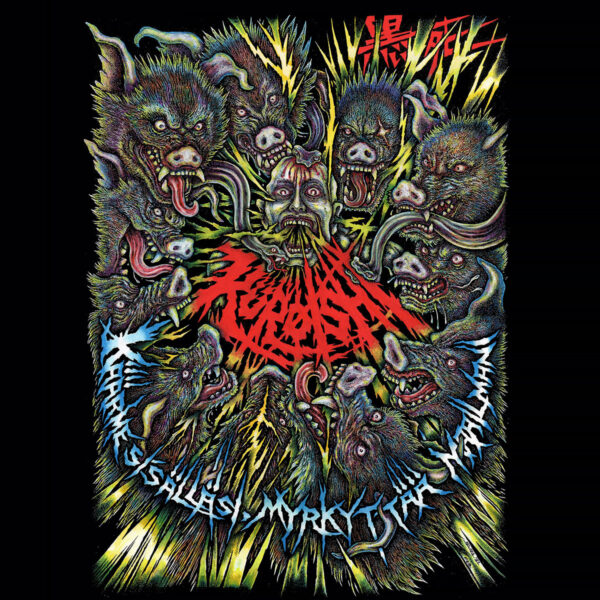 Kürøishi, one of Finland’s most aggressive hardcore bands, has released a new album! Since their tour in Japan, Kürøishi have received much attention. This new album is shrouded in an atmosphere of gloom where melodic phrases on guitar echo with expansiveness, while the band’s hardcore style is kept in tact. Like their fellow countrymen SELFISH, the influence of BURNING SPIRITS HARDCORE can be strongly felt here. The sound production is as great as ever and various evolutions are sprinkled across the songs with no end to the stylistic beauty of the music. This album could be called a perfect example of modern hardcore. You will never feel bored. Kürøishi is a band who have constantly updated themselves over their output and this is truly a Kürøishi album. The artwork was made by SUGI, the artist since their 1st album, and resonates precisely with Kürøishi’s sound.

The third LP is often a turning point for punk bands. A lot of punk bands manage one great album, maybe two, and then they break up or decide to do something less immediately punk. If you manage a third album, you’re setting yourself on a trajectory. Will you tread water, keep refining your craft, or decide you’re going to “grow as an artist” and make indie rock or metal or something?

Kürøishi’s third LP answers this question by shaving about 60 seconds off their song lengths and making their most immediate and pulverizing record yet. While the second LP was an epic steeped in atmosphere and guest appearances, this third LP is relentless velocity and nonstop attack. Quick and stripped down, fewer mid-tempo parts, riffs akin to Wolfbrigade and Tragedy that are brutal yet melodic, dark yet flirt with a later Disfear sense of rocking…but of course it wouldn’t be Kürøishi without at least a couple big epic guitar solos strewn about.

So what does Kürøishi’s answer mean? When many punk bands are “experimenting” by their third LP, Kürøishi get leaner and meaner, upping the ante and making their most direct and PUNK record yet. The trajectory is set: without veering into metal or experimentation, Kürøishi continues to d-beat our skulls into dust with their refined hardcore destruction.

Recorded and mixed by Antti Lindholm and Mastered by Jack Control at Enormous Door Mastering (enormousdoor.com). Front cover artwork drawn and painted by none other than the true japanese artist and legend Akihiko “Sugi” Sugimoto himself. Guest vocals Janne Mannio on tracks 1 and 6.