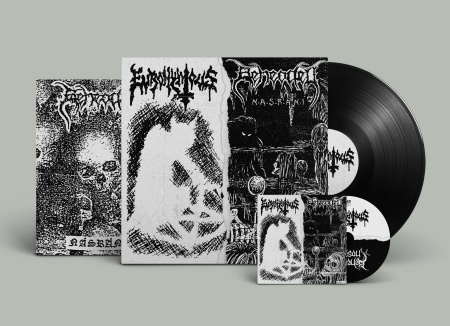 Solid black vinyl limited to 200 copies.
Vicious Black/Death assault from Singapore’s circles of hell! EURONYMOUS “Surrender unto evil” is the band’s only opus from 1991, a wicked masterpiece of ancient blackened wrath! BEHEADED NASRANI’s “Demo/promo tape 1991” is another nigthmarish descent into the most putrid and malevolent realms of old school Singaporean Death Metal. Both Demos have been mastered from top quality sources provided by the bands, sounding much better than any previous edition around.. Bonus CD with both Demos and an extra unreleased Demo/Reh. 1989 by BEHEADED NASRANI, whose front cover art and logo have been designed by the legend that is Chris Moyen. Fanzine styled booklet with scans of the original artworks, photos, articles and an extensive interview to both bands. If you enjoyed FOAD’s reissue of XASTHUR’s “Hidden lore” that came out not long ago and other South Eastern Asian demons like Abhorer, Profancer and early Impiety, with a sound that undoubtedly also draws to the most barbaric and violent Brazilian classics of Cogumelo’s golden years, you can’t miss this infernal split!