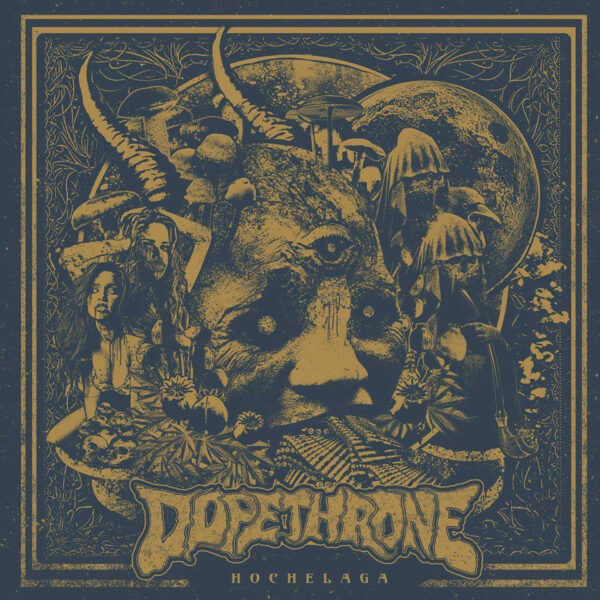 I don’t care how scuzzy you think you sound, you aren’t Dopethrone. These guys are the drug problem in Heavy anything, and I am pretty sure they have a problem. Not the issue, because they have graced us with another slab of pure sonic ecstasy, their new catalogue of riffs entitled ‘Hochelaga’. This is a 7 song ode to brutal, smoke infused riffs, dripping with vicious intent to peddle. I am a lover of all things fuzzy and dirty, so this scratches my itch! Let’s dig in!

The album is, in a word, massive. Beware the listener that clicks play on this with cheap speakers. You’ll soon need to replace them simply because of the sludgy, waxy build-up their riffs will leave on the speaker material. They play some of the nastiest blues you’ll find outside of Satan’s record collection, focusing on booze, rebellion, occult, sex, and of course, drugs. The threesome has been breaking shit and setting it on fire since about 2009, officially, with ‘Demonsmoke’, then a 2 year hiatus till Dark Foil in 2011, III in 2012, and now a further 3 years until this current miasma of debauchery, ‘Hochelaga’. The band is also named after album 3 from Electric Wizard, Dopethrone, which is also a must listen (in my opinion) of the stoner/doom/heavy blues pantheon.

As far as the band plays, it’s as heavy and groovy as a well used vinyl in a second hand bin, and the vocals sound like they’ve been soaked in gasoline and then rehydrated with whisky and greased with dab wax. They make my throat hurt, even more so than grindcore. Vincent Houde (guitars/Vocals) throws his back into it, with a voice that sounds like  something lurking in shadows of the campfire. It’s amazing, and fits the band like a jigsaw piece. Their sound is that of the genre, very fuzzy, downtuned and with heavy drive that blasts at you like a 12 gauge, accompanied by very deft drumming supporting them. Borman on the skins uses a heavy cymbal style, but its honestly not as bad as some prog or hardcore bands and the only reason I have noticed, is because I am looking for things, and they are smooth as 10 year old bourbon. They use samples from what sound like older movies and PSA stuff, mostly to warn folks that witches, bikers, slick haired vultures, drugs, and evil exists out there, and its agents are lurking around every corner you can’t see around to take the youth. Just a perfect touch to their playing and adds a little menace into the mix, with ‘Hochelaga’, they paid attention to the details and your certainly not short-changed.

My highlight from this album is ‘Scum Fuck Blues’, song 4 on the record, simply because it’s absolutely the most pissed off track, and makes you feel like you wanna go wreck something. We’ve all been in those pitch black moods, where absolutely nothing is good anymore, and we want to simply just crawl in a hole and die. That’s this song. It’s a bad mood and a bar fight put to sound, and the video that TheWhoreChurch did on YouTube is absolutely perfect. Using old footage, both movie and life, they capture the grit of the music, the brutality and passion with which Dopethrone lay down their drug fueled rhetoric.

The album is topped with artwork that should have been a horror poster for an obscure 70s satanic ode, perfectly communicating what sonic ride you are about to embark upon. This album is perfect for the person who wants to dig deep in the grave for stoner/doom music, who wants something a little darker off the path of music. Or, if you’ve found Electric Wizard and loved them, want something new to spin. Grab it as soon as it drops!