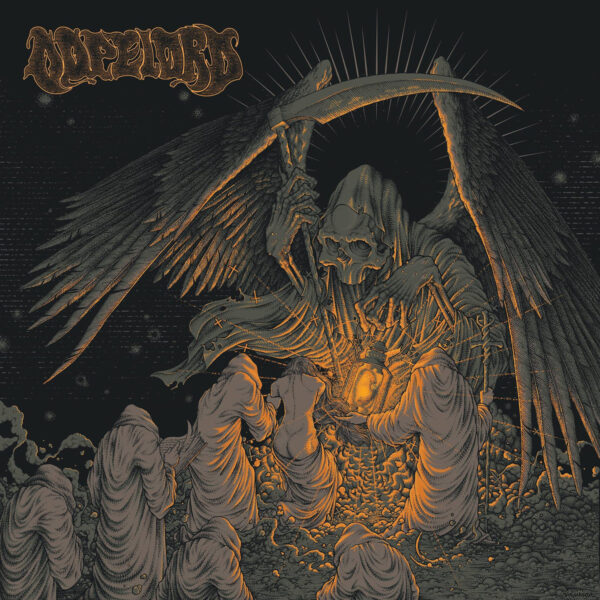 DOPELORD – Children Of The Haze LP

If music could manifest itself in nature, Polish stoner doom quartet Dopelord would be a murky, black fog. “Children Of The Haze”, the band’s aptly named third album, envelopes you like a cloud of smog that swarms your senses and leaves you lost and helpless at the side of the road. Dense slabs of syrupy guitar and bass fuzz purr underneath clean (with some exceptions), retro vocals. “Children of the Haze” is defined by loose grooves, ghoulish riffing and a very vintage sense of wickedness. Dopelord prove that, unlike many other stoner metal bands, they are not content to just create the same song several times over and call it an album (although it is worth noting that sometimes that trick can be executed wonderfully).
Each of the six tracks on “Children of the Haze” has its own identity, while still managing to retain all the key elements of Dopelord’s sound. The album’s opening track, “Navigator”, creeps like a limping tortoise. Although the opening track oozes with tranquillity rare to metal, “Children of the Haze” quickly changes moods on the next track, “Scum Priest”. The album’s most aggressive track,“Scum Priest” is loaded with bombastic riffing, a vicious demeanour and has the harshest vocals to be found anywhere on the album. “Scum Priest” is followed by the album’s title track, whose chant like vocals and archaic atmosphere makes it the ideal soundtrack to any and all coven based activities.
With clean guitar tones, cavern-like reverb and absolutely no attempt made at heaviness, “Skulls and Candles” is the most fiercely individualistic track on the album. “Skulls and Candles” is a spooky yet oddly assuaging little number, whose location as the album’s fourth track makes it a very effective and pleasant palate cleanser after the twenty-one minutes of thick fuzz and heavy riffs that precede it. This divergence is followed by the albums longest and possible standout track, “Dead Inside (I&II)”. Over the course of nine minutes and nineteen seconds, “Dead Inside (I&II)”unfolds from a sluggish grind into the album’s fastest, most propulsive and hardest-hitting track. The payoff is gradual, but is all the more effective for the time that it took to get there. “Children of the Haze’s closing track, “Reptile Sun”, sees the album at it filthiest. Squalid tones, gruffer vocals and overall nastiness give “Reptile Sun” just the right amount of punch to perfectly end the album.
https://dopelord.bandcamp.com/