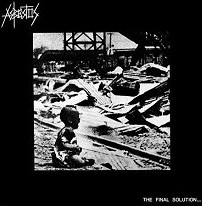 Official reissue of the classic, ultra rare debut full length (1989) by this long time running metallic Hardcore cult from Japan! A faithful reproduction made exactly as the 1st pressing that was originally released in few hundred copies and quickly became a rarity sought after by collectors and sold at insane prices. Includes lyric sheet, foldout double sided poster, sticker and to respect the F.O.A.D. tradition we also added an OBI strip! Quoting Doom, Discharge, Chaos U.K., Disorder, Crucifix and Conflict as their influences on this album, ASBESTOS were actually one of the first Japanese HC bands to introduce Crustcore elements in their sound incorporating them with powerful Metal/Punk riffs creating a dark, catastrophic mood all of their own. Audio taken from the best sounding sources in existence and cleverly remastered for vinyl at Toxic Basement Studio. Watch the trailer HERE

Be the first to review “ASBESTOS – The final solution…. LP” Cancel reply