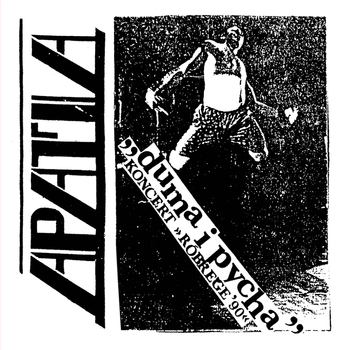 In 1990, the final edition of the Róbrege festival was held in Warsaw. One of the festival days was organized by the team from Qqryq, a well-known fanzine/label and one of the most important and effective supporters of young independent bands and the overall DIY scene in Poland. Throughout that day there were foreign guests (The Vernon Walters), as well as established Polish bands (like Dezerter and Karcer). There were also representatives of the thriving underground scene (Apatia and Inkwizycja). For these latter two bands, this was their first opportunity to perform in front of such a large audience. Apatia’s set was documented on the cassette Duma i pycha” and released on Noisense Tapes. It quickly became one of the most popular tapes in Poland at its time in DIY circles. Their set was like a breath of fresh air. It was dynamic and full of traditional hardcore aesthetics yet with new movement onstage. The emergence of a next level in Polish HC / Punk had become a reality. During the show the band presented new material which cemented their sound for the coming years. Apatia played very thoughtful, emotionally driven hardcore with many tempo changes and a rich structure to the songs, all of which were complemented by great lyrics. It made a strong impression on everyone and more than one person after that event replaced their boots with sneakers. Hardcore in Poland was fully in bloom with many emerging bands, zines, distros and initiatives. Although live releases appear very rarely on Refuse Records, this one is an important document of the new wave of HC bands who appeared during the political transformation of the country in the late 80’s and early 90’s. Given the fact that the sound quality is solid enough, we felt that it should definitely appear on vinyl. This is a one-time pressing of 242 copies, with mastering by Smok (Studio As One).