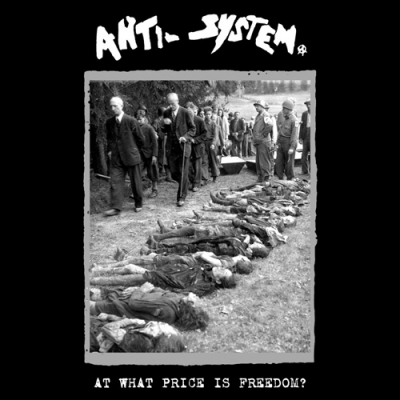 ANTI-SYSTEM – At What Price Is Freedom? LP+CD

Anti-System is a legendary British Anarcho punk band. Formed in Bradford in 1981 , the band recorded a demo whose tracks found their way onto a Pax Records compilation. Their debut release was the five-track ‘Defence of the Realm’ EP issued in 1983, which was followed (on Reconciliation Records after the closure of Pax Records) with the ‘No Laughing Matter’ album in 1985 and the 12 ‘A Look at Life’ EP in 1986.

The band reformed in 2014 and now here, 30 years on from “A Look At Life” comes the first new ANTI SYSTEM release in a generation! “AT WHAT PRICE IS FREEDOM/” is a stunning 5 track, 20 minute EP including the exceptional, nearly 8 minutes long title track , plus two other great new tracks and two blistering re-recordings of tracks that featured on the “No Laughing Matter” LP. Its quite a statement of intent to mark the return of this band!

Available as a limited edition 12” vinyl with CD included of all tracks, or stand alone CD release.