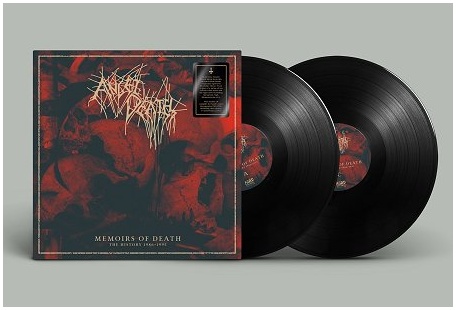 Solid black vinyl limited to 250 copies.
Hailing from Rieti, central Italy, ANGEL DEATH is one of the most feared and ancient names in the Italian Death Metal scene, formed in 1984 and active until 1995. This total discography collection on F.O.A.D. Records is a dream-come-true for a lot of infernal maniacs that for years have hoped to see all the ominous recordings of this band collected on one release. Malicious, satanic Death/Black assault of the most aggressive form! Double LP compiling their entire discography 1985-1996 including their “Death to Christianity” Demo 1986, s/t Demo 1991, “Gore (Blood of war)” EP (1992), “Exorcisin’ the pain / Desire for immortality” EP (1992) and bonus tracks.. A total overview on their bloody history starting with their raw and primitive first Demo and developing into a grinding assault of merciless brutality topped by those seriously disturbing vocals oozing a feeling of ruthlessness and pure evil. Originally signed by Deathlike Silence Productions as part of a string of ten releases that never saw the light (also including Abruptum, Sigh, Monumentum etc.) Sourced from the band’s studio masters, housed in a deluxe gatefold sleeve. Pressed on180 gram vinyl!