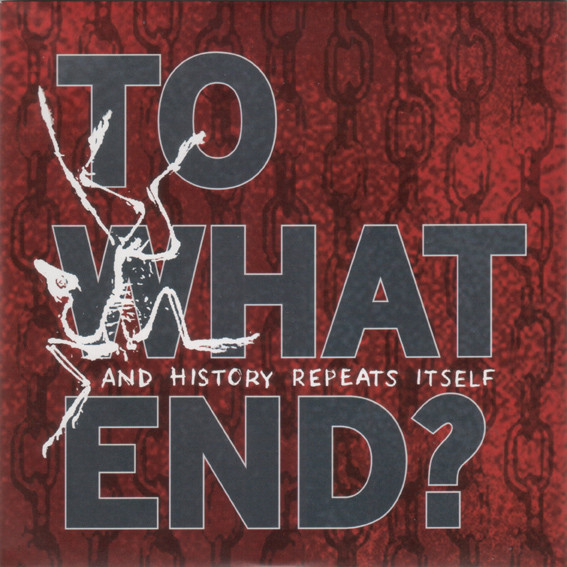 TO WHAT END? – And History Repeats Itself EP

And history repeats itself was posted in April ’07 and here it is again with full scans, ripped @320 and free beers for everyone. i don’t believe there is a single crustie out there who doesn’t know To What End?, right? in case that happens, check Swedish Punk for their bio.
For the history, these three tracks were recorded for a demo that Yellow Dogs decided to release in 7″ format and they did well cos this ep shreds: “By the begining of the year both Martin(ex-Burning Kitchen), Elenor(Ex- Gruesome action) and Micke(Today’s Overdose, ex-Wolfbrigade) had join the band with Elias(ex- Second thought) and Dadde (Asta kask, Today’s Overdose, Ex- Wolfbrigade, Imperial Leather, SME etc) and Jocke(Today’s Overdose, Ex-Wolfbrigade, Wolfpack, SME)…We started rehearsing and it sounded pretty good. After some time we decided to record a demo, which later that year ended up as our first 7″ on Yellow Dog”. Too many great ex-bands connected here, the outcome of demo was hopeful and became a 7″ and finally what was born was great, the rest is history. Find more in SwedishPunk and in TWE? myspace. Recently they released the long awaited split 7″ with Witch Hunt which is as good as expected
Thats the short short rant, i d like to post something from Aus Rotten since Pittsburgh,their homeland has become the host of G20 but their ep’s were posted before. Anyway, go get it @320+scans and ask Whisp to bring the beers. (the price for his long hiatus from blogging. i still remember this photo from a TWE? gig and Whisp dancing in front of Eleonor, this would be a document of the Lady Crust writer for the future crustie generations)