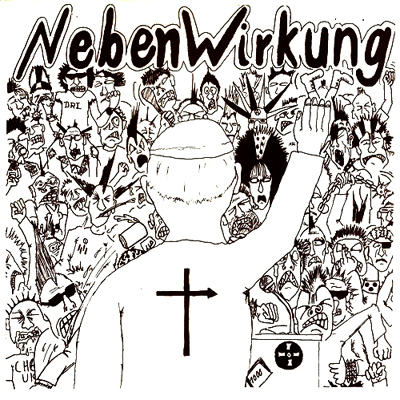 NEBENWIRKUNG is a band from Bremen-Nord, Germany which was founded in june 1980, they were amongst the first german bands that played aggressive, brutal and pissed-off Hardcore, Punk, together with other acts like INFERNO, VORKRIEGSJUGEND, VORKRIEGSPHASE, BOSKOPS, BLUT + EISEN, … they started to play Punk in their own style, far away from the typical Late Seventies UK sound that has been popular at that time. In the Early Eighties the living conditions for Punks in Germany haven´t been nice (like everywhere else) and so their music was raw and really offensive. The world hated the Punks and the Punks were hating the world.

Fick Den Papst” originally was released on HEIMAT RECORDS from Germany in the year 1984, this here will become the first legit re-release on the original 7″ format.