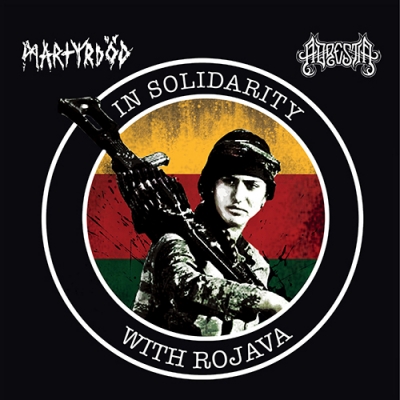 Benefit EP, limited on 500 copies! – All Benefits from the sales will go directly to aid Rojava. – In Solidarity With Rojava” is a split EP featuring two intense hardcore crust bands from Sweden. Martyrdöd shouldn’t need any further introduction, the band has been delivering high quality crust punk since 2001, and today they have established themselves as a leading band in the genre.

Adrestia is a relatively new band, even though some of the members might be familiar because of their previous work in bands such as Shades Of Grey and Massmord. This EP is their first official release.

The bands contribute with two songs each. The Martyrdöd side of the EP starts with “Harmagedon”, a song previously released on the “List” LP from 2016. It continues with a previously unreleased track called “Harmagedon part 2”.

The Adrestia side features “Opium”, as well as “The Sun Of Rojava”, a tribute to the freedom fighters of Rojava. “The Sun Of Rojava” can also be heard of their debut album “The Art Of Modern Warfare”, which will be released later this year.

However, the purpose of this EP goes beyond music. In a common statement the bands declare that this is a benefit record for Rojava, and that all profit from the sales of the record will go directly to Rojava.

They emphasize the similarities between the anarchist ideology often seen as the fundament of the crust punk scene, and the political system in Rojava.

The bands have created their own label/support organization called “Punks For Rojava” (www.punksforrojava.org) solely for the purpose of supporting Rojava, and besides the release of this EP there are more project with the same purpose coming up.