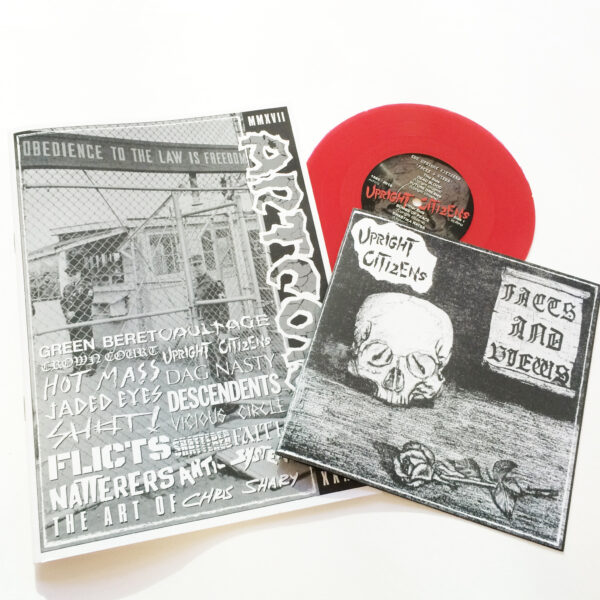 Our take: I was super excited for this new issue of Artcore because there is a bit of a focus on one of my all-time favorites, Germany’s Upright Citizens! Not only do you get a much-needed repressing of their classic Facts and Views 7″, but the layout of said EP has been expanded with a tour diary from the band’s 1985 US tour and the zine also includes a newly-conducted interview with the band. If you don’t have it already, the EP is worth the price on its own. I ride hard for pretty much all UC, but this EP is probably the most precise distillation of their sound, featuring five of their very best songs (indeed, probably their five most memorable songs period) as well as the most powerful recording the band ever got. As for the tour diary that accompanies the EP, it’s really hilarious because it’s so… German. It’s basically a near-constant complaint about America… the food, the way the shows are run, the bands they play with… pretty much everything they encountered in the US, and all of the complaints are delivered in that matter of fact way that is so distinctly German. It’s totally hilarious. The interview in the zine is less informative, unfortunately, as the person being interviewed can’t seem to recollect much about their days in the band. Anyway, aside from these treats for the aficionado of US-inspired German hardcore, you also get plenty of other content in the latest issue of the zine to keep your eyes busy while you’re on the toilet or whatever. Worth it at twice the price if you ask me.